Artist and CGI designer Mark Rademaker, who first got my attention when he stepped up to design the sleek-as-lightning Vesta-class starships I concocted in the Star Trek Destiny trilogy (for Captain Ezri Dax’s slipstream-drive hotrod the U.S.S. Aventine), has teamed up with Star Trek veteran designer Mike Okuda to help NASA scientist Harold White create a more realistic vision for a future “warp drive” starship, which they’ve dubbed the IXS Enterprise. 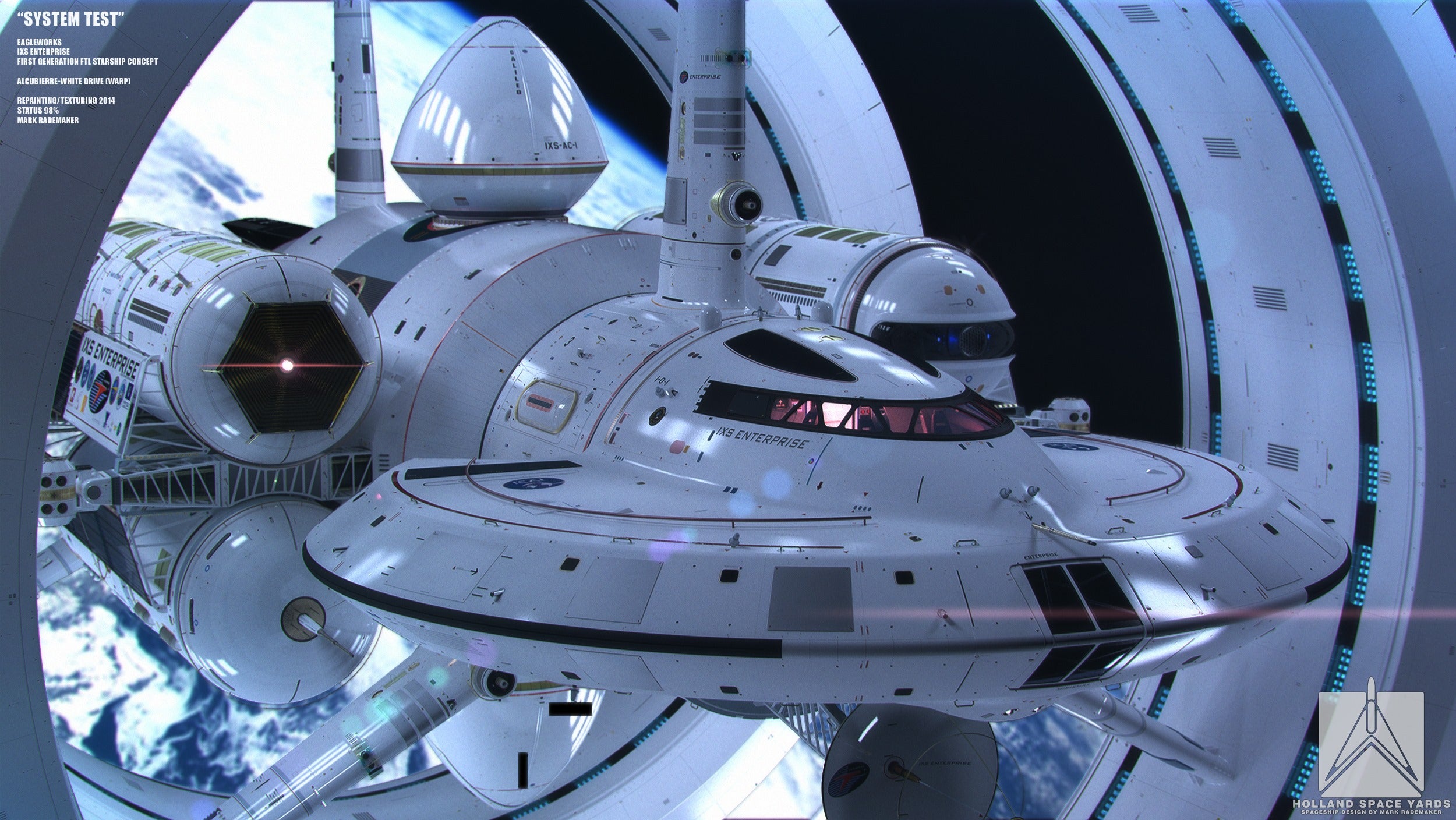 Check out this video, which mentions their contribution to the project (starting at 41:54):

Awesome work, guys! Here’s hoping someone perfects a cure for aging and death so we can call stick around long enough to take a ride on one of these beauties, and set foot on an alien shore!

By now, you’ve all no doubt seen my blog posts from earlier this week, recounting in words and pictures and links my recent VIP visit to NASA’s Johnson Space Center. Today, in what is actually a first for my blog, I am pleased and honored to bring you a guest blog post by my friend and fellow Star Trek author Kirsten Beyer, who shares her perspective on our June 28, 2013, foray into the wondrous realm of NASA.

Sometimes, words fail me. This is tough to admit. I’m a writer. I’m supposed to be reasonably proficient at this.

But sometimes things happen that are so far beyond words, I just…

There’s a small group of folks on the planet who are lucky enough to have been asked to contribute to the universe of Star Trek fiction.  Some see each other a few times a year at conventions.  A couple of years back we decided it would be nice if once in a while, we could just gather and hang out without the demands of a convention schedule.

I missed the first one.  No way in hell was I about to miss the second.

Last Friday, I was part of a group of writers who were given a special behind-the-scenes tour of the Johnson Space Center in Houston.  END_OF_DOCUMENT_TOKEN_TO_BE_REPLACED

Here for your viewing pleasure is some of the video my wife Kara shot of the Star Trek authors’ panel, which was held in the Teague Auditorium at NASA’s Johnson Space Center in Houston, TX, on Friday, June 28, 2013.

1. Breaking into writing for Star Trek

Since last Friday, I’ve intended to write a lengthy, detailed blog post describing the absolutely mind-blowing day of VIP behind-the-scenes coolness that I and a group of my fellow Star Trek writers enjoyed at NASA‘s Johnson Space Center in Houston, Texas.

Then my friend and fellow author Dayton Ward beat me to it.

Over on his blog The Fog of Ward, he presents a detailed account of the entire amazing day, starting with the group’s arrival the night before the visit, and culminating in our 10-hour walking tour of several of JSC’s most notable historic sites and working facilities.

Because I can’t hope to write an account more accurate or entertaining than his, I will simply tell you to go read it there, and to keep reading here if you’d like to see an assortment of photos of our visit. END_OF_DOCUMENT_TOKEN_TO_BE_REPLACED