There’s only about a day left in the Kickstarter for Athena’s Daughters. It is remarkably close to hitting its $38k stretch goal — a hardcover edition of its companion volume, Apollo’s Daughters, to which I’ll be contributing an original short story, “And Hell Rode With Her.”

Spread the word, folks. Time is short, and I’d really love to see this project make it over one more hurdle on its way to the finish line.

Just 30 hours left to raise $1,051 and green-light the hardcover edition of Apollo’s Daughters!

$936 away from the hardcover edition of Apollo’s Daughters!

$394 away from the next awesome stretch goal… damn, this thing is a juggernaut!

Mission accomplished! With a full day to go before the finish line, the Kickstarter has passed the $38k mark, unlocking the stretch goal of a limited-run hardcover edition of Apollo’s Daughters. w00t!

Over the past month, I’ve told you in this space (and others) about the Kickstarter for Athena’s Daughters, an anthology of short stories by female authors writing about heroic female main characters. It’s been so successful that it’s going to have a companion anthology, Apollo’s Daughters, in which male authors will write tales of strong women. One of those stories will be my own upcoming short, “And Hell Rode With Her,” which will be a tease for my upcoming original novel project.

If you haven’t chipped in yet, you should. Because time is running out — the Kickstarter ends Wednesday, January 8 — and because this is one of the best deals around.

Why should you chip in if it’s already funded? I’ll tell you why.

For just $5, you’ll get more great reading material than you’ll know what to do with. Seriously, multiple bonus stories and novels, plus Athena’s Daughters, all in eBook format. That’s a tremendous value for just $5. Just $5 more gets you the Apollo’s Daughters eBook.

Last but not least: this might be the ONLY way you’ll be able to get these new anthologies. Once this Kickstarter ends, there’s no guarantee these kick-ass new works of original science fiction and fantasy will be sold again. Don’t miss your chance! Chip in while there’s still time!

As of Friday, January 3, 2014, the Kickstarter for Athena’s Daughters has passed the $31k mark, meaning Joe Corroney’s cool original cover for Apollo’s Daughters is a go!

Thanks to everyone who chipped in. I’m really looking forward to writing my story for this anthology.

With just one week left to go before the end of its Kickstarter funding push, the Athena’s Daughters anthology has been wildly successful. Not only has it far exceeded its basic goal and many of its stretch goals — including the commissioning of a companion volume, Apollo’s Daughters, in which male authors will spin tales of strong female main characters — it is now within less than $700 of achieving its next stretch goal: an original cover for Apollo’s Daughters by renowned Star Wars artist Joe Corroney, colored by Brian Miller.

This would be a major coup for the anthology, so please consider chipping in: for just $5, you can score a whole lot of awesome goodies. Even if you’re only contributing your $5 now, you still get numerous other incentives unlocked by the previous stretch goals. There is no downside: in fact, this might be one of the best bargains you’ll ever get.

Please chip in and help us get over just one more hurdle so that Joe Corroney can grace our words with an epic illustration that does them justice.

Apparently, I am constitutionally incapable of refusing an opportunity for shameless self-promotion. That’s how I explain my role in yet another podcast discussion of my work with the fine folks of Trekmate.org.uk — specifically, Sina and Michael of Ten Forward.

In this latest audio gabfest, we talk about my latest New York Times bestseller, A Ceremony of Losses, as well as my previous novel Zero Sum Game, to which Ceremony is in many respects a sequel, and my upcoming project Section 31: Disavowed, which will continue the story arc of ZSG and ACoL.

I also touch briefly upon my support for Athena’s Daughters, a Kickstarter project to fund a female-written anthology of original SF and fantasy short stories about compelling female main characters. I am excited to report that this Kickstarter reached its $24k stretch goal in just 10 days, which means I and many other male authors will get to tell our original tales about strong female main characters in a companion anthology, Apollo’s Daughters. (If the Kickstarter reaches $38k, Apollo’s Daughters will have a limited print run in hardcover, so keep those contributions coming in, folks!)

Listen to my latest turn on the Captain’s Table podcast and donate to the Athena’s Daughters project (note: this Kickstarter ends January 8, 2014). 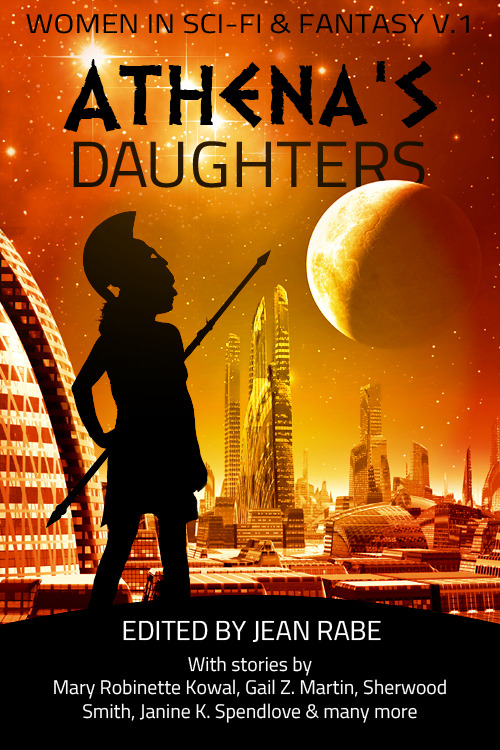