Though it has been several months since the publication of my Star Trek: The Next Generation trilogy Cold Equations (September–December 2012) and will be months until my next novel hits shelves (Star Trek: The Fall, Book III — A Ceremony of Losses, in November 2013), a spate of new reviews of my work have hit the Internet this week.

Over at the United Federation of Charles on blogspot.com, reviewer Charles Phipps shares his in-depth reactions to all three volumes of the Star Trek Destiny trilogy. I’ve been pleased to see how thoroughly he enjoyed the trilogy, and that many of his favorite parts as a reader were my favorites as the author.

A couple of great excerpts. First, from his review of Gods of Night:

“David Mack does a wonderful job with twists in this plot. When there’s conflict with Erika Hernandez and her crew about the new aliens, I was sympathetic to both sides. However, I squarely came down on the side of those who wanted to escape the Caeliar’s planet at all costs–and against those who disagreed. Seeing how this situation turned out was one of the few times I was genuinely stunned as a reader.”

And this snippet is from his review of Mere Mortals:

“Erika Hernandez is a complicated character as she’s able to bond with the Caeliar in a way her crew can’t and this occasionally makes her an unsympathetic character. Erika Hernandez might have decided to stay with the Caeliar of her own free will but the others hate them for holding them indefinitely, despite there being no malice. Erika, herself, starts to comprehend this only after her crew begins dying off. Watching her rediscover her humanity at the end was genuinely heartwarming.”

On the audio podcast front, my friends Michael and Sina at The Ten Forward Book Club on trekmate.org.uk —ably abetted by fellow podcaster Melissa— dig into a detailed discussion of Star Trek: Cold Equations, Book I: The Persistence of Memory. It’s a spirited discussion, with Melissa coming to the book cold, not having read any of my previous work, nor any of the recent Star Trek fiction. It’s interesting to see how she reacts to a Star Trek universe and characters who are very different than what she remembers and expects, and noting which make sense to her and which don’t.

As always, Sina, Michael, and their guest Melissa are incisive and insightful commentators, and their discussion of the book’s story, themes, philosophies, and characters is lively and spot-on. They present some superb literary review and criticism, and I encourage everyone to settle in and listen to this podcast, because it is ABSOLUTELY BRILLIANT.

You can find The Ten Forward Book Club’s podcast review of The Persistence of Memory here.

Here we are, more than four years after the initial release of my Star Trek Destiny trilogy, and it still seems to be inspiring in-depth critical conversations between fans of Star Trek literature. As one might imagine, it feels gratifying to know that something I wrote continues to generate fresh interest.

This time around, the conversation is going on at The G & T Show‘s new spinoff podcast, The Celestial Temple Book Club. 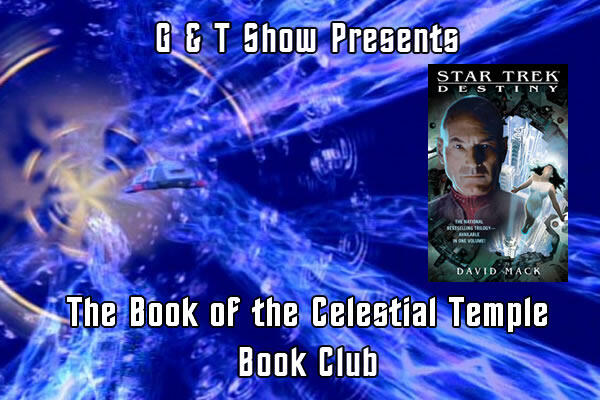 FAIR WARNING: This podcast roundtable discussion of the Destiny trilogy is uncensored (NSFW and NSFK) and chock full of spoilers. Wade into this verbal scrum at your own risk.

A couple of months ago, I gave a tip o’ the hat to hosts Michael and Sina of the Ten Forward Book Club podcast on TrekMate.org.uk, who had served up some seriously erudite criticism and commentary about my Star Trek Destiny trilogy.

Last month, I recorded an interview with Michael and Sina; we discussed the Destiny trilogy, my early days of writing for Star Trek on television, and much more. That interview is now live and available for your listening pleasure as both a download and a streaming podcast.

Show my online friends Michael and Sina some love and give this new podcast a listen.

I just want to give a friendly tip o’ the hat to hosts Michael and Sina at TrekMate.org.uk‘s Ten Forward Book Club podcast, and their guest Matt Rushing (from Trek.fm‘s Literary Treks). They’ve served up three in-depth, well-considered, and truly insightful discussions about each book in my Star Trek Destiny trilogy.  Follow these links to download or stream each show:

If you’re curious about the trilogy and don’t mind spoilers, or just want to hear a good literary criticism roundtable, check out their show. It’s good stuff.

Earlier this year, the powers that be at Simon & Schuster released a new-and-improved omnibus edition of my Star Trek Destiny trilogy. This new edition, in addition to having all three volumes between one set of covers, included a number of small edits and revisions I had made to the original text. While there weren’t any major changes to the story or dialogue, I made many tweaks that I felt improved the flow of the prose.

A number of readers who prefer eBooks have asked me in recent months why there was no electronic version of the book released at the same time as the print omnibus. I don’t have an answer for that question, but I do have good news for those who asked it:

The revised, omnibus edition of Star Trek Destiny will be available for multiple e-reader platforms starting next month, at the very reasonable price of just $11.99 — half what one would have paid for the original paperback edition of the trilogy, and significantly lower than the cover price of the trade paperback omnibus.

Adding to my delight at this news is the fact that this eBook will be the first of my titles to include my new bragging-rights cover credit, “New York Times Bestselling Author.”

So if you’ve been waiting for the deal of a lifetime to pick up the Destiny trilogy, here it is. Enjoy!

For those of you who missed all the hype and hoopla about my Star Trek Destiny trilogy when it was first published more than three years ago, its recent republication in a new-and-improved omnibus edition brings you a new chance to find out how it came to be, and what it’s all about.

Freelance writer Linda Whitmore interviewed me for Hero Complex, the L.A. Times blog “for your inner fanboy.” The Q&A piece, titled “‘Star Trek Destiny’ author David Mack’s Borg epic comes full cube”,  is a very thorough look into the genesis of the project, its development, and what makes it tick.

If you have a few minutes and even a smidgen of curiosity, I encourage you to give it a read.