Ever wondered what really goes into creating eye-catching cover art for Star Trek novels? Rob Caswell, the digital illustrator whose work inspired the creation of the new Star Trek: Seekers literary series, takes you behind the scenes into his world, in “What Goes Into Star Trek Novel Cover Art?,” his guest blog post over on StarTrek.com, a follow-up to its debut last Saturday of the covers and synopses for the next two Star Trek: Seekers novels.

He also offers up some insights into how he got professionally entangled with the likes of Dayton Ward, Kevin Dilmore, and yours truly, in addition to the usual rigmarole about his creative process.

Enough hard sell. Go read it, already, and get a glimpse of the mind that brings you awesome covers like this one for Dayton Ward & Kevin Dilmore’s Star Trek: Seekers #4 – All That’s Left —

Oh, and happy Star Wars Day (May the Fourth), for those who celebrate it.

Do you have both of the first two books of Star Trek: Seekers? Here’s a little hint: they look like this —

If you do, and you weren’t able to get to Shore Leave in Baltimore last month, and want a shot to win one of these gorgeous posters—

—autographed by yours truly, as well as by authors Dayton Ward and Kevin Dilmore, and Seekers cover artist Rob Caswell, then you need to know about this:

Dayton is running a contest on his blog to give away FIVE of these signed posters. Go there for the details, then enter by September 6, 2014, for a chance to win! 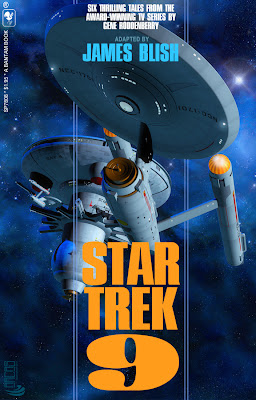 I know what you’re thinking:“Dave, I don’t think you’ve recorded enough podcast interviews about Star Trek: Seekers. Could you post another?”I sure can! Listen to me, Dayton Ward, Kevin Dilmore, and artist Rob Caswell discuss the new series with host Jason Hunt (aka scifi4me) of Live from the Bunker.We taped the show on Monday, August 18; it will be available for streaming playback and download here starting tonight, Tuesday, August 19, at 11:30pm EDT.

Meanwhile, be on the lookout for STAR TREK: SEEKERS #2, Point of Divergence, by New York Times bestselling author Dayton Ward and Kevin Dilmore. It should be starting to appear in your local book retailers any day now, and its official release date for e-readers and online retailers is Tuesday, August 26!

If you’ve ever thought, “I wish David Mack would participate in a live Internet radio show with a call-in option so I could bug him with an annoying question and have it and his stymied reaction recorded for posterity,” now is your chance.

I’ll be chatting =LIVE= about the new Star Trek: Seekers series with the folks at BlogTalk Radio’s Writers Alive program on Saturday, August 16, from 8pm–9pm EDT.

Point your browsers our way, and call in if you think of something sufficiently irritating to yak about.

Along with my partners in literary crime Dayton Ward and Kevin Dilmore, I recorded a lengthy chat with Nick Minecci, Terry Lynn Shull, and Mike Medeiros of The G&T Show. That gabfest is now live at this link!

Next week, the entire Star Trek: Seekers team — Dayton, Kevin, myself, and artist Rob Caswell — are scheduled to record an interview with Jason Hunt for Live from the Bunker (another fine show on BlogTalk Radio), and I’ll be flying solo on a pre-recorded interview about the new books with Matthew Rushing and his always entertaining co-hosts at Literary Treks on Trek.fm.

As always, I’ll disseminate links to all those shows as soon as possible after they go live!

This morning, readers of USA Today‘s “Book Buzz” section were treated to the first public reveal of the covers for the first two novels of Star Trek: Seekers, an all-new original literary series by myself and the writing team of Dayton Ward and Kevin Dilmore.

The angle of the story is that it marks a first for Star Trek, in that the series was inspired by the digital illustrations of artist Rob Caswell, who had envisioned in his DeviantArt gallery an alternate reality in which Gene Roddenberry produced a 1970s-era sequel to the original Star Trek called The Seekers.

Just as episodes of the original Star Trek had been novelized by James Blish, Caswell imagined that the adventures of The Seekers would be novelized in the same style — and he crafted six brilliant, retro-style covers for these books that never were, and made them look like well-loved (and stained and stamped) library editions.

In March of 2012, just after the final novel of the Star Trek Vanguard series had been released, I was talking with Dayton about what we wanted to work on next. We were interested in developing another series on which we could alternate writing duties, as we had done with Vanguard, but we weren’t sure what form that series might take.

Then I showed him Rob’s work on DeviantArt. Rob had used the original Archer-class starship design by our Vanguard illustrator Masao Okazaki as an element in his faux Seekers covers, and he had styled the covers with the 1970s-era typography and design that had been used on the classic Star Trek novelizations that Dayton and I both had devoured as young Star Trek fans in the ’70s.

When we saw Rob’s cover illustrations, Dayton and I agreed we wanted our new series to be exactly what we saw there: an homage to classic Star Trek, right down to the retro look and feel of the art and the type on the covers. We also knew that we wanted to call it Star Trek: Seekers — and that we wanted to bring Rob aboard as our creative partner on the new series, since it had been his imaginative leap that had brought the vision into focus for us.

One of the best moments of my career as a Star Trek writer was the afternoon when I got to be the one to call Rob and tell him that his work had inspired us to make his imaginary series a reality in prose — and that we wanted him to join our team and work on it with us.

Now, thanks to the support and hard work of a great many people at Simon & Schuster and CBS Television Entertainment — including editors Margaret Clark and Edward Schlesinger, publicist Juliana Horbachevsky, and licensing executive extraordinaire John Van Citters — that dream is about to come to fruition.

For a while now, on various social media platforms and in Star Trek literature-related discussion forums, I’ve been dropping hints about a new Star Trek book project I have in the works. Having just unveiled the project to the audience at Shore Leave 35 in Hunt Valley, Md., I can now post the news here for the rest of the world to enjoy.

Coming next summer, Star Trek: Seekers will be an all-new sequel series to the Star Trek Vanguard saga. I will alternate writing privileges on this new series with my Vanguard creative partners, writing duo Dayton Ward & Kevin Dilmore.

Seekers will feature ships, characters, settings, and situations from the Vanguard saga, but it will also chart a very different course from its predecessor. Whereas Vanguard was described by many as “Star Trek meets the new Battlestar Galactica,” Seekers represents a return to the more classic style of Star Trek adventure: “strange new worlds, and new life-forms.”